There are about a million lists and guides on what to do while in Amsterdam. I’m not going to bore you with yet another tourist sales pitch for canal boat tours or a visit to the Van Gogh museum. I live in this city and I know the coolest attractions in town that will take on a whole new dimension when you’re thoroughly baked! 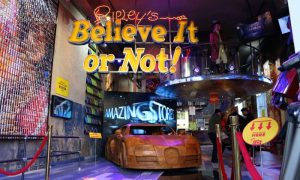 Ripley’s Believe it or not.

Not so much a museum but more an awesome ‘Odditorium’. A collection of very freaky and amazing oddities compiled by the great Robert L. Ripley (1890–1949), a cartoonist, explorer, reporter, adventurer, and collector, who travelled to 201 countries in 35 years seeking the odd, the unusual and the unexplained. Amazement, giggles and thrills guaranteed!

Zoos are cool places to hang out, especially when you’re stoned out of your gourd. Artis Amsterdam Royal Zoo is more than just a zoo. Its proximity to the city center makes it ideal for a quick stop along the way. Although it would be a shame to rush through, because for a small zoo Artis has so much to offer. Besides the stylish and modern animal enclosures, there’s an incredible planetarium where you can sit back in a comfy red chair while you journey through space. Or how about the state-of-the-art museum located in the zoo called “Micropia”, where the unseen world of microbial life becomes visible in a spectacular and interactive way.

Nemo is a scientific playground for small and big children alike (admit it! You’re still a kid at heart). Run around and go nuts with the hundreds of hands-on experiments in physics, chemistry or biology. Everything you see at Nemo is interactive and interesting and you’ll learn something new every time you go because they change the exhibits on a regular basis. End your visit on the rooftop terrace for a breathtaking view of the Amsterdam skyline and harbor. 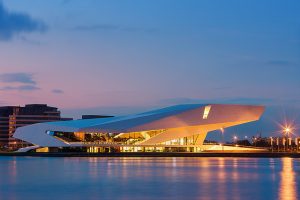 Catching a movie and smoking some bud go hand in hand. Although you’re probably not planning on going to the cinema while on vacation. You might want to rethink that! Not only is the EYE building’s exterior an ‘eye-catcher’ that looks like a mix between a spaceship and a digital iceberg, the interior is just as trippy. The all-white, asymmetric corridors lead to a large open restaurant with odd wooden curves and an incredible view of the IJ-canal and Central Station. The film museum also has great exhibitions about legendary films and filmmakers. Oh, did I mention that you can go and see the best classic and timeless films of the last two centuries???

Trippy. That’s the first thing that comes to mind when talking about Electric Ladyland. Part museum, part art gallery, part art shop, it houses a large room-sized “Fluorescent Environment” where you can become a part of the art. Seeing is believing. A must see if you’re into fluorescent and downright trippy stuff! 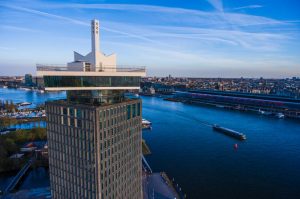 Across the water from Amsterdam’s Central Station and next to the EYE Film Museum there is a huge tower that houses many trendy clubs and restaurants. Which is cool and all, but the coolest thing about the tower are the 20th and 21st floors. There you’ll find the highest, 360-degree view of the city. And they have a swing set up there that swings right over the edge! If you aren’t afraid of heights, smoke up and go high!

Yes, it’s a botanical garden, but before you say ‘no thanks’ consider the fact that it is also one of the oldest in the world! The building alone is reason enough to drop by! If I mention that they have a tropical rainforest inside, does that change your mind? No? How about a butterfly garden where those little guys land on your hands and shoulders. Come on, admit it, you want go there while you’re as high as a kite…uhm….butterfly.

After reading about museums and galleries did you really think I’d forget to mention that Amsterdam wouldn’t be Amsterdam without its own cannabis museum? Now go out there and get educated!

Things NOT to do when visiting Amsterdam