The war on drugs has not gone according to plan for those who started it. It might have been a great platform to run elections or to get rid of political enemies, but its failure is a foregone conclusion. The only problem is, the general public hasn’t caught on to this idea yet. As long as ‘we, the people’ don’t speak up, the powers that be will continue to use corrupt drug policies to further their own agenda. Luckily there are many different ways to let your voice be heard. One of those ways is the social media campaign “Support.Don’t Punish”. Keep reading on to find out how.

Herbish Today was invited by Aleksi Hupli – founder of drug advocacy site and YouTube documentary channel Drugventures – to join forces and contribute to the Support Don’t Punish (SDP) campaign throughout the city of Amsterdam.

A simple idea can have a big impact

The idea behind the campaign is simple; take to the streets and tell anyone willing to listen about SPD’s campaign goals and, if the listener agrees, take a picture of them holding the official SDP logo. By way of this “visual petition”, they get a chance to show the world they are against the war on drugs. 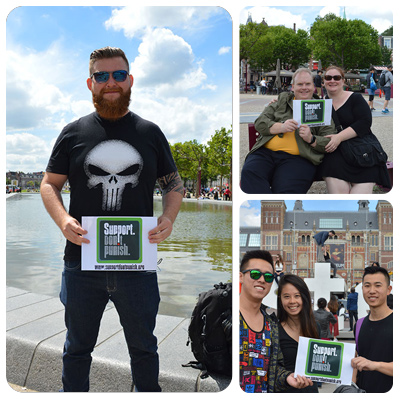 “The campaign aims to promote drug policy reform, and to change laws and policies which impede access to harm reduction interventions.”

The bottom line of the SDP campaign

The SDP campaign has formulated the following key messages:

The bottom line you should take away from this campaign is that the “War on Drugs” has done more harm than good in the last few decades. Just take a closer look at what is happening in the Philippines for instance.

The campaign aims to compel governments to rethink their efforts in this needless ‘war’ and to allocate the massive amount of time and resources into more important beneficial projects, like healthcare or better education.

Herbish.Today wholeheartedly agrees with this idea, and that’s why I happily accepted Aleksi’s invitation to participate in the campaign. Even though the 26th has come and gone, that doesn’t mean you missed your chance to contribute to the cause! You can still do your part!  You can still send in photos for the campaign, and even win a T-shirt in the process by entering in the SDP Photo Contest!

Feel free to add as much information as you’d like. You could mention, for instance, what the campaign means to you and your community, or ideas for the 2018 Global Day of Action. 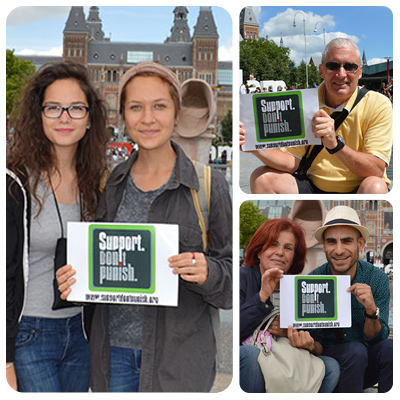 All photos will be featured on the SDP Facebook and Twitter accounts. At the end of the June, they will select the five most retweeted, liked and shared photos. From that pool, a winner will be drawn at random. The winner will receive a campaign t-shirt. If you have any questions, get in touch with the SDP. Good luck!

Even if you didn’t get a chance to chip in this year, you can always sign up for next year’s campaign on the SDP website!

Join the fight against the War On Drugs!

Things NOT to do when visiting Amsterdam