Everybody wants a go!

The Magic-Flight Orbiter just looks really cool on my coffee table. Like I’m doing a mini science experiment, and I’m not the only one who seems to thinks so. Whenever I have friends over, their gaze instantly falls on my little Orbiter, and they all want to have a go. It’s safe to say the MFO is an eye catcher indeed.

Not only does the Magic Flight Orbiter look inviting, it also works like a charm. Now it’s much easier to share your Magic Flight Launch Box with vape-newbies. Those who own a MFLB know you always have to give a full tutorial for first-timers. But, that’s no longer the case with the MFO extension. Just tell them to push the battery and gently draw air in, then release the battery when they can barely see the water through the vapor.

The MFO is a double win when it comes to improving the vaping experience. Besides the fact as mentioned earlier, that you can now visually gauge the heat-up duration by the amount of visible vapor, the fact the water cools the vapor means you’re producing thicker vapor. A double whammy, you’re getting better flavor production and a much more satisfying exhale with bigger clouds. This enhances the overall vaping experience tremendously.

So, nothing bad to say?

Negatives? No, no major ‘deal breakers’. The MFO does have some minor drawbacks, however. The first and most obvious thing to mention is the fragility of the glass itself, which if dropped from even a small height will most likely break. There is no (lifetime) warranty on the glass like you get with the MFLB.

It’s also really easy to pull the MFO off the table if you aren’t carefully handling the rubber air tubes or if you get snagged on them while getting off the couch, for instance. So, be aware of the tubes at all times.

Speaking of tubes, they get dirty and sometimes even clogged up over time, which means you need to clean them on a regular basis with rubbing alcohol. The glass itself, for the most part, stays moderately clear. However, on occasion I have had some oily residue build up on the inside of the glass. Although, this is easily cleaned by filling the Orbiter with some rubbing alcohol and shaking it for a couple of seconds. So, all in all, cleaning the MFO is necessary from time to time but is not an overly complicated process. 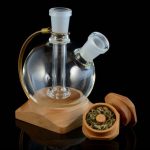 How to combat Vape Tongue