I cringe every time I hear someone use the word “Marijuana”, and I know why. The big question is; do you? If so, then you’re not going to find anything new here. Just a short rundown of the word’s backstory and an old (but juicy) conspiracy theory. However, if you have ever used the “M-word” without knowing what it truly stands for, then best keep on reading, and hopefully, you’ll never want to use that word again.

The history of the word “Marijuana”:

The origin story of the word “Marihuana” began in Mexico, as slang for cannabis, sometime after the Spanish brought the plant with them to the New World in 1545. At that time “Hemp” was (mostly) used as an industrial crop for rope and textiles. So far, nobody outside of the Spanish-held territory on the American continent had ever heard of the term Marihuana.

This all changed after the Mexican Revolution (1910 to 1920), when bloody conflicts sparked an influx of Mexican immigrants to the USA. As the stream of refugees intensified, the slang term Marihuana found its way into the American vocabulary, despite a growing animosity towards the Mexican community.

Ten years later, this resentment towards Mexican immigrants and a rise in popularity of “Bud” as a psychoactive drug in the (predominately black) Jazz scene, created a perfect political breeding ground for a man named Harry Jacob Anslinger to boost his career.

By that time, Harry was already a veteran law-enforcer. He started out as an investigator for the Pennsylvania Railroad and went on to work for various military and police organizations to combat international alcohol and drug trafficking. He was, on top of that, a staunch believer in prohibition and an ultra-conservative. 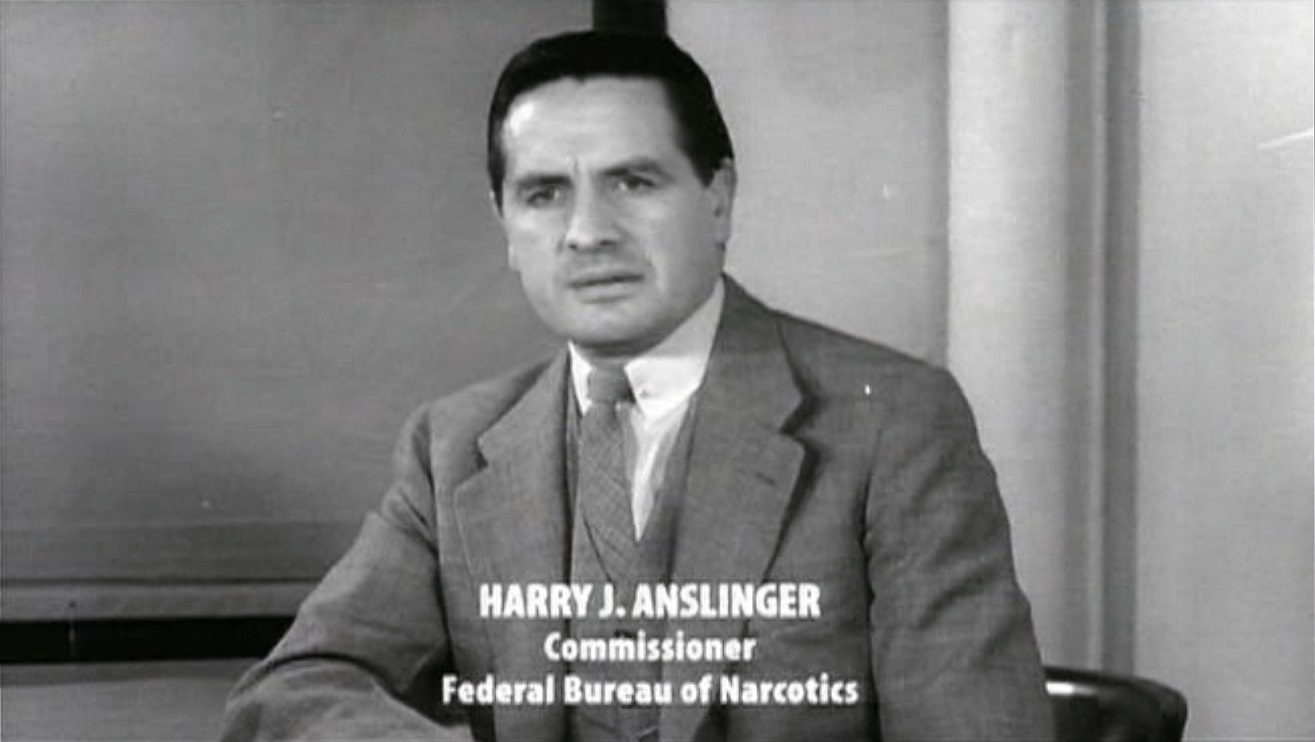 In 1930, Anslinger got his career boost when he was appointed as commissioner of the first US Federal Bureau of Narcotics (FBN). Around the same time, alcohol prohibition was coming to an end, and the government needed a new scapegoat to keep law abiding citizens in line. “Weed” fit the bill perfectly; it was brought in by Mexicans, widely used by black jazz musicians and the white liberal “lefties” who listened to it. When Anslinger, the newly appointed leader of the FBN was given carte blanche to start a terror-campaign against this “Laughing Grass” and all those who used it, he took to the task like stoners to Pop-Tarts.

Before 1930, cannabis was widely used as an industrial cash crop and medicine throughout the United States. Some local- and state-level restrictions and regulations were in place, but these were peanuts compared to the next seven years of cannabis-hell with Anslinger as the overlord. Under the guise of “Locoweed” and propaganda films like the poorly produced 1936’s “Reefer Madness”, the public was warned about the dangers of “Pot”. According to these “social-horror flicks” it made men crazy, violent and/or homicidal rapists and woman hysterical, adulterous nymphomaniacs. The proverbial nail in the coffin of poor old “Mary Jane” was the “Marihuana Tax Act of 1937”.

In the grand scheme of things, the law itself wasn’t a big deal. It stated that anyone who wanted have anything to do with “Ganja”, whether it was to grow, sell, use or even give it away for free, had to register at the tax office and pay a small tax-fee through the purchase of special tax stamps. Nevertheless, the real reason for, and what made the Marihuana Tax Act of 1937 so threatening, was that it gave law enforcers legal grounds (read; an excuse) to arrest and prosecute everyone who had anything to do with “Sticky Icky”, namely Mexicans, blacks and liberal lefties.

A quote from H.J. Anslinger during a Congressional Hearing of the Ways and Means Committee;

“……we find then that Colorado reports that the Mexican population there cultivates on an average of 2 to 3 tons of the weed annually. This the Mexicans make into cigarettes, which they sell at two for 25 cents, mostly to white high school students.”

Besides the thousands of arrests that followed the law coming into effect, it also legitimized the term Marihuana (what would become Marijuana). It would also forever solidify the negative connotation in official legislation, as well as in the collective minds of the American people. 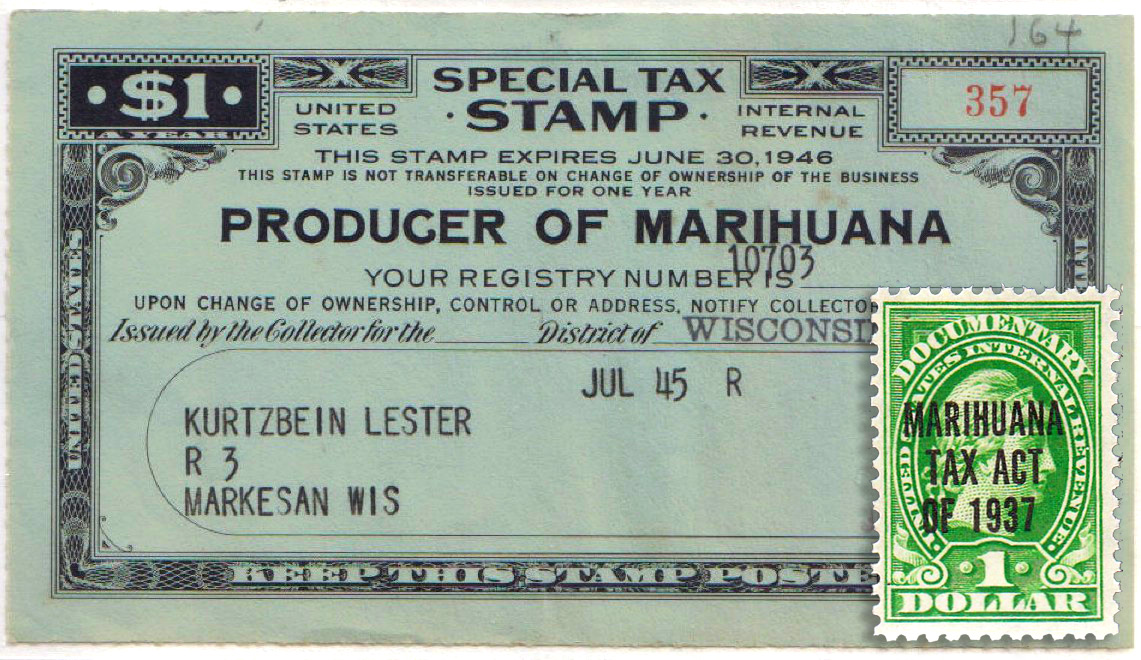 A conspiracy to make cannabis industrial enemy No.1

Nowadays more and more folks are wising up to the fact that “Wacky Tabacky” isn’t as wacky as Mr. Anslinger and the FBN made it out to be. Still, it might come as a surprise that, even back then, most people didn’t see the harm in it either. That’s why it took almost seven years for Anslinger and his cronies to transform the reputation of the versatile plant from “Mostly harmless” into “Public enemy No.1”.

By today’s standards, we know that this vilification of cannabis was done purely for political reasons, more than anything else. Some people, however, claim there was more to it than that. Although those rumors have always been labeled as conspiracy theories, there is some merit to them. I do not want to claim any of the following as true or false, but if you have any inkling of how the world works, these rumors might not seem so far-fetched;

The widely documented “rumor” is that Harry Anslinger’s father-in-law, Andrew Mellon, had his own reason to paint a green target on cannabis’ back. Besides being the head of the US Treasury Department, Andrew was also the owner of the Mellon Bank and, among other things, investor and majority shareholder of Gulf Oil, at the time one of the biggest oil companies in the US. Around the 1930’s, petrol made from oil had one big competitor; Ethanol fuel made from hemp. 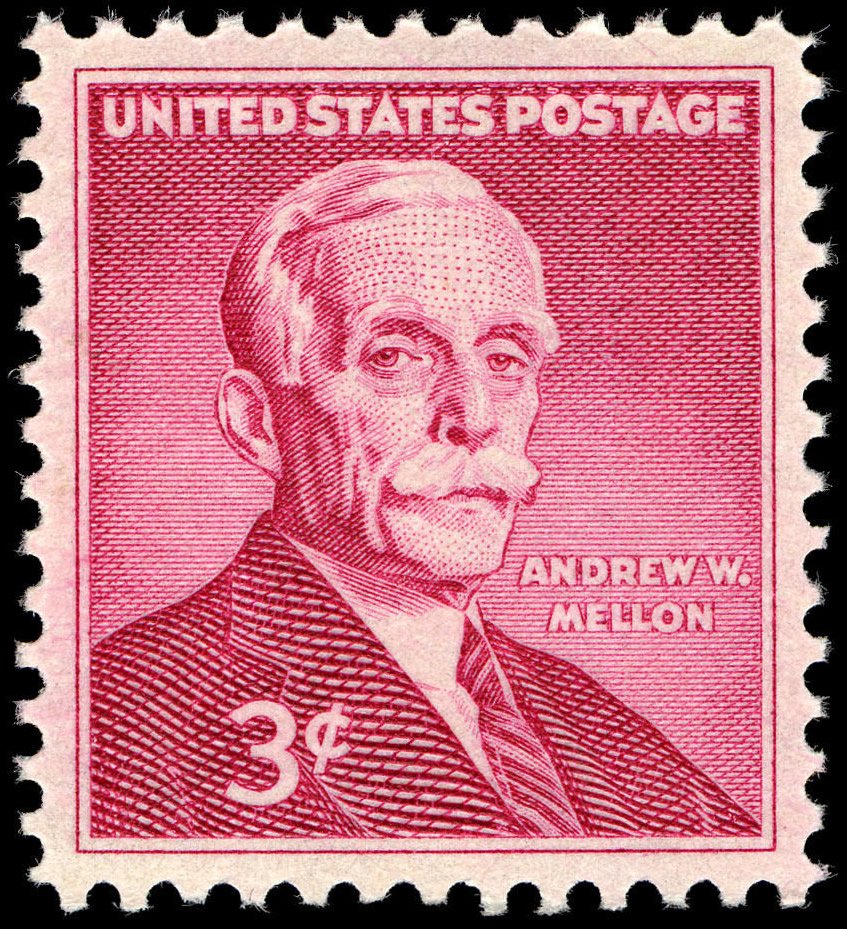 Andrew Mellon on US Postal stamp

It didn’t help that Mr. Mellon was also funding two other major players in the anti-cannabis lobby, namely; W.R. Hearst and Lammot du Pont II. Hearst was a news media magnet and wood paper manufacturer and wanted to get rid of the hemp paper industry that was just starting to become lucrative. Lammot du Pont II owned DuPont (E.I. Du Pont De Nemours & Co), a Petrol Chemical company that made its name with the manufacturing of gunpowder. Around the 1930’s DuPont started to

produce synthetic materials like Nylon and Teflon as well. Both saw cannabis as a significant threat since most equivalents of their products could be made with hemp for half the cost and half the resources. Both these men knew that cornering the hemp market wasn’t an option since it was easily cultivated and highly accessible. So, they were more than pleased to have their friend Andrew Mellon appoint someone who’d play ball and give “Marijuana” a bad rep.

Fast forward to the Nixon years and beyond

Whether you take any stock in this theory or not, the fact remains that Marijuana was a great tool as a political scapegoat, something that has been proven time and time again.

Take Richard Milhous Nixon for instance, the 37th US president that single-handedly began the “War on Drugs” and gave the green light for the formation of the Drug Enforcement Administration (DEA) as well as the Controlled Substances Act of 1970.

For Nixon, marijuana wasn’t a threat to the health of the nation’s citizens, as he so valiantly claimed, but a way to identify and condemn his political enemies. Luckily for us, Nixon had the habit of recording all conversations held in the Oval Office on tape, so we have indisputable evidence what his real agenda was when he doubled down on the negative stigma of cannabis. Just listen and judge for yourself:

The strategy of linking “Left-handed cigarettes” with undesirables didn’t stop with Nixon either; his successors happily picked up where he left off. Presidents like Ronald Reagan, George H.W. Bush and even Bill Clinton, with his “Three Strikes Policy”, used the word Marijuana to criminalize and persecute whole demographics of the population.

Now you too, know why

I hope that by this time, you will have come to the same conclusion I have; Marijuana is a negatively loaded word and has no place in this day and age. It isn’t merely a synonym for cannabis but a political tool to further the goals of a certain few and, if you believe the conspiracy theory, to fill the pockets of big-wig-fat-cats. It is a demonizing term, and you should set an example by never using it again.

It’s not like there aren’t enough alternatives to describe the plant, the flower or the effects it has. Maybe you have noticed that throughout this article I’ve used many different, more favorable slang terms for “Weed”, and I haven’t even begun to scratch the surface when it comes to synonyms for the flower I so love and cherish. Here are some beauties I didn’t get to use; Pakalolo, Sensimillia, Yerba, Chronic, Buddha, Chino, Doobie, Dutchie, Giggle stick, Herb, Hippie lettuce, Indo, Mota, Roach, Spliff…..and so on. Just, whatever you do, please don’t use the M-word anymore, because…well…now you know why.

My take on Cannabis Liberation Day 2017